We republish the MST’s (Landless Worker’s Movement) reflections on the criminalization of the movement after the coup against President Dilma Rousseff. This article was originally published on the Friends of MST website.

After the congressional coup that removed Dilma Rousseff from the presidency of Brazil and installed Michel Temer, the coup government moved swiftly against the MST and other social movements. The Temer government is seeking to treat the MST as a criminal organization and agrarian reform as a criminal conspiracy against Brazilian society.

This newsletter brings you a series of reports and analyses on the attack against the MST. Our website is now featuring a full report on the criminalization efforts.

Additionally, our website is also reporting on the proposed austerity amendment to the Brazilian constitution (PEC 55) and an analysis of its impact on Brazilian society.

At this time of the year, we also want to bring to you greetings of peace and solidarity from the MST. The MST honors the support it receives from around the world, including the efforts of the Friends of the MST. The MST also reciprocates this solidarity by extending its support to those of us in the United States who are confronted with an unprecedented political situation here and the certainty that OUR social and political movements will be under attack by a Trump administration in the years to come.

We are pleased to bring you news about the MST, Brazilian politics and society and the connection we all have around food and agriculture, available in English only in this newsletter and on our website. We ask for your support by making a tax-deductible donation to the Friends of the MST. Our ability to provide information on the MST in English is dependent on your support. Thank you.

Since the congressional coup brought a right wing government to power in Brazil, the MST has been under attack. The Friends of the MST brings you a series of articles on the ongoing criminalization of the MST and other social movements in Brazil.   We begin with the MST’s Statement:

The MST denounces the “escalation of repression against the struggle for land, where the interests of agribusiness associated with violence of the State of Exception prevail” after action by the PR Civil Police on November 4, 2016. Read more.

With the arrest of two MST militants shortly after the coup and continuing with the police invasion of the MST’s national school (ENFF) in November, the Brazilian government signaled its intent to criminalize the movement. 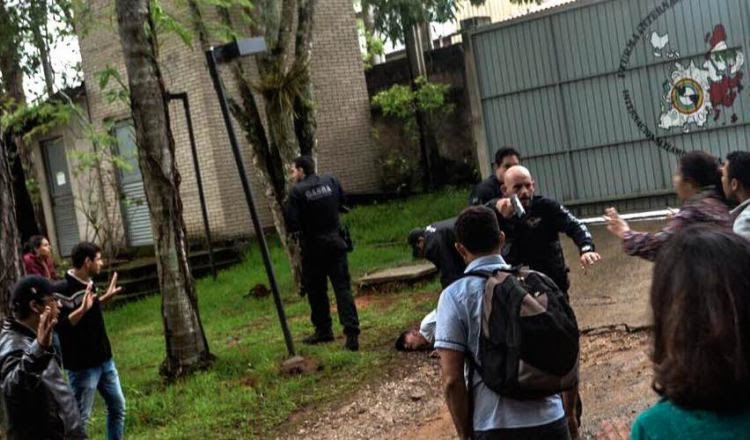 The criminalization of the MST:

The coup government has attempted to treat the MST and agrarian reform as a criminal conspiracy. Brazilian attorney Aline Piva provides  analysis of the criminalization effort. Additionally, the Brazilian Supreme Court has rejected treating the MST as a criminal organization. Even after the Supreme Court ruling, the  coup government pursues criminalization of the MST. The criminalization efforts have also reached the level of high school students, when police action and violence was used against student protests and sit-ins against the proposed austerity law (PEC 55).

Resistance to the criminalization efforts has been strong. Immediately, after the raid on ENFF, over a 1,000 people gathered in support of the school.   La Via Campesina and other organizations have  denounced the persecution of the MST and social movements in Brazil. Dilma Rousseff, the president ousted by the congressional coup, denounced the attacks on the MST. The coup government’s actions have also spurred reaction within the government itself, as a  debate in the federal Commission on Human Rights illustrates.